Grimsborough, A New Beginning is the first case exclusive to Criminal Case: The Conspiracy.

Several weeks after Jack Archer finished reading Charlie's journal, the player received an invitation from Grimsborough Police Department which invited the player to return to the police department and investigate the mystery of the falling meteorite one year ago. When the player returned and reunited with Jones in the headquarters, he took the player to the Grimsborough entrance to show the player the changes after 5 years. But when they were there, they found comic artist Hari Tono hanging on the Grimsborough sign with a wound on the head.

During the investigation, detective Hasuro Haku reported that his late sister, Mina, who committed suicide 6 months ago, appeared in CCWiki Hotel. However, it turned out to be a mistake as the team discovered that the woman who Hasuro mentioned was just a hotel guest, Later, the team found enough evidence to arrest transcript writer Sploder Science for the murder.

Upon admitting to the murder, Sploder admitted that Hasuro's late sister was his girlfriend. He said that she was an energetic girl who always told him her ideas and her dream to become a famous comic artist. So when she committed suicide, Sploder did not believe that she was just sad about her work and tried to find the truth. And he discovered that Hari, her partner, had stolen all of her work and became famous by using her work to compose The Conspiracy comic book. Sploder then called Hari to come to Grimsborough entrance. After making Hari unconscious by his scarf and tying him on the Grimsborough sign, Sploder used a bag full of coins to hit Hari's head. Judge Powell sentenced him to 5 years in jail.

Later, while Jones was showing Gloria Grimsborough, the team got a call from a student from NBK school, a top school of Grimsborough, saying that there was a murder there.

Arif Pyo
Add a photo to this gallery 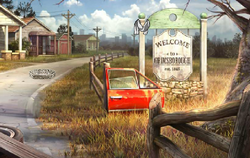 CCWiki Hotel Stairs
Add a photo to this gallery

Retrieved from "https://criminal-case-official-fanfiction.fandom.com/wiki/Grimsborough,_A_New_Beginning?oldid=90009"
Community content is available under CC-BY-SA unless otherwise noted.