Grayson Pierre, appearing as a recurring character in Criminal Case Venusville where he serves as city judge.

Grayson is 30-year-old judge with short red hair and blue eyes.He wears judge robe with brown tie and white shirt under it.

Grayson's favourite activity is playing basketball and watching movies with his wife and teenage daughter.His favourite animal is a lion.

In his suspect appearence, Grayson has soot stains all over him. 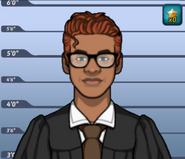 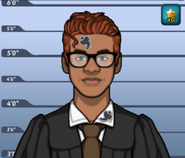 Grayson, as he appeared in Act of Disloyalty (Case #35 of Venusville).
Add a photo to this gallery
Retrieved from "https://criminal-case-official-fanfiction.fandom.com/wiki/Grayson_Pierre?oldid=192442"
Community content is available under CC-BY-SA unless otherwise noted.