Gabriel Herrera (1982-2019) was a main character featued in Criminal Case Venusville where he served as profiler of Venusville Justice Fighters before resigning in Breathing Space (Case #55 of Venusville).

He appeared as a suspect in the murder investigation of security guard Glenn Morowitz in Breathing Space (Case #55 of Venusville) and the killer of Demos Anthony Blackpaw in Of Evil Portent (Case #57 of Venusville) before his death in Falling Apart (Case #59 of Venusville).

37 years of age, Gabriel had black eyes, black hair with gray streaks on the sides near his head, and a five o'clock shadow. He wore a mint green sweater over a white collared shirt.

Now a former profiler, Gabriel had a degree in criminology. He had also lived in Italy for a stint after university. Others easily confided in him due to his genuinely kind and caring nature. He had an interest in history as well as different languages and cultures.

In his suspect appearences, Gabriel wore a red suit over a black vest, white shirt, and red necktie. He also sported a golden Fleur de Lys brooch on his suit.

In his last quasi-suspect appearence, he wore a brown cloak over his red suit.

-Case #2 Across the Board

Case #2 Across the Board 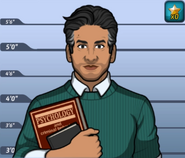 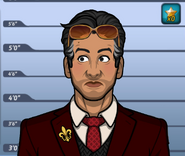 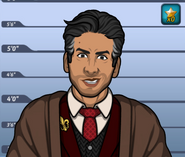 Gabriel, as he appeared in Falling Apart (Case #59 of Venusville).
Add a photo to this gallery
Retrieved from "https://criminal-case-official-fanfiction.fandom.com/wiki/Gabriel_Herrera?oldid=212108"
Community content is available under CC-BY-SA unless otherwise noted.