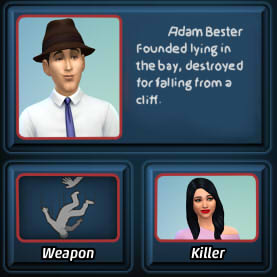 Free Bay is the second fanmade case of Agunachopace. Is also the second case of the Nice Land district in the fictional city of Little Hollow.

The victim was a famous reporter named Adam Bester. He was just about to reveal an important secret of the city (called tha Great Secret), but Adam was found death in the bay of Little Hollow.

The killer was his secretary, Shina Glovola, who had long called for a promotion at the office of Adam Bester; but he never take care of the order because he only wants Shina for his body. Finally, to get back at him, invite him to an appointment at the farthest dark corner of the city and pushed him to the cliff of the bay, killing him suddenly.

In court, Shina don't showed remorse for the murder of Adam Bester and declared that the victim doesn't was a honorable person and deserves to die. She was sentenced to 25 years in prison, without a chance of parole. But the police investigation stated that Adam had no desire for Shina and  he only was killed for not to mention the Great Secret that was publishing.

Retrieved from "https://criminal-case-official-fanfiction.fandom.com/wiki/Free_Bay?oldid=12794"
Community content is available under CC-BY-SA unless otherwise noted.