Fredo Mancini was a suspect in the murder investigations of CEO Serena Goldberg in Science of Elevator (Case #4 of Alpha Bay) and drug supplier Richard Stamford in Turn on the Light (Case #7 of Alpha Bay).

32 years of age, Fredo is the second-in-command of a street gang named Street Riders, an organization based in Street Valley, the first district of Alpha Bay. He has brown hair tied into a ponytail at the back with shaved sides. He sports a thin mustache and stubble as well as a muscular figure. He is seen sporting a feather collar black vest with parts of it displaying a camouflage pattern and several badges. He wears several earrings and a silver chain around his neck, and sports black fingerless gloves. He also sports a dark bruise on his chest and several tattoos on both of his arms.

In his first suspect appearance, it is known that he knows physics and uses screwdriver.

In his second suspect appearance, it is discovered that he knows chemistry, knot binding and uses insect repellent.

Fredo found himself in the red when Susan and the player discovered that he was threatening and forcing the victim to give money. He didn't deny the fact the he threatened the victim on behalf of Salvador Cordero by saying that their gang would harm her daughter. Later on, it was revealed that he took up a fight with the victim because she didn't agree to give them money anymore. Anyway, Fredo was found to be innocent when the team arrested Rita Goldberg for the murder.

Post-trial, the team confronted and managed to make him give all the money which their gang took from the victim. But to the team's and Fredo's surprise, all the notes turned out to be fake but Fredo said that he didn't know a single thing about it. As the team lacked evidence, they let him go that time with a warning.

Fredo became a suspect for the second time after the team found his note which was addressed to the victim. When interrogated he said that Richard gathered a lot of evidence about the secrets of the two gangs. Susan then asked why he threatened the victim and he replied that it was because the victim wanted to share nothing with him.

Later on, the team discovered that Fredo left Street Riders as Salvador was being greedy day by day. They then talked with Fredo who said that Salvador was being greedy day by day and that he couldn't tolerate seeing Salvador to be greedy anymore. He also said that Salvador even started to cheat everyone. His accusations turned out to be true as Salvador later got arrested for being the mastermind of fake notes business around Street Valley. However, Fredo was proved to be innocent after Roger Spitfire was incarcerated for Richard's murder, Diego Diaz's abduction and the attempted murder of Aiden Miller. 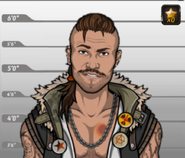 Fredo, as he appeared in Science of Elevator (Case #4 of Alpha Bay). 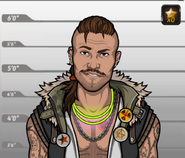 Fredo, as he appeared in Turn on the Light (Case #7 of Alpha Bay). 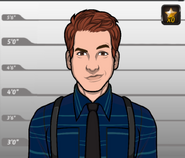 Habib Romanov, Fredo's step-brother.
Add a photo to this gallery
Retrieved from "https://criminal-case-official-fanfiction.fandom.com/wiki/Fredo_Mancini?oldid=165306"
Community content is available under CC-BY-SA unless otherwise noted.