"Welcome to Conner's Village! A body was found in the entrance of town. Can you catch the killer before they exit Conner's Town?

First Case is a fan made case in Queensville (Season 1) and the first case overall. It takes place in them Conner's Village district of Queensville.

When a new detective came to Queensville, something in the sky has fallen. Police officer Tony Freeman call him into the station to investigate Lisa Rosenburg's body. A witness named David Drog found the body, David knew her in high school, he said that she was smart and kind. Police need the detective to find evidence to find out who killed her.

Mid-investigation, the detective found a death threat from the brew house. Later, James was in the brew house taking his lunch break. The team got enough evidence to arrest the victim's friend, Amanda Wyoming, for the murder.

Upon admitting the murder, Amanda said that it was all her fault. She said that her brother, Jimmy, died in a car accident last year. Lisa said that she didn't care about his brother's death. Infuriated at Lisa, Amanda grabbed a knife and stabbed her in the chest. Judge Parker sentenced her to life in prison.

Post-trial, Chief Hunt congratulated Tony and the player for their hard work, but the chief let the team to go help the people in Queensville. Tony and the player checked up on James if he's okay, James was looking under the tables to find something, he told them that he dropped his wallet and can't find it. They went under the tables and found James' wallet, but they want to make sure if that was his wallet. After they took a look at the wallet, they gave it back to James.

Tony and the player also found a dish that James was using, they send the sample to James to see if there was anything in the sample. After they gave the sample to James, Jenny was panicking and ran to the team, she told them that one of the kids fell into the sewers. Jenny told them that the student was pushed, the team went to the sewers to save the boy. After the team saved the boy, they questioned Jenny if she saw everything, she told the team that she saw some of it and knew the person.

After all the events, Chief Hunt want the player to go to the docks to help a construction worker from falling. 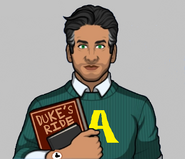 Retrieved from "https://criminal-case-official-fanfiction.fandom.com/wiki/First_Case?oldid=92712"
Community content is available under CC-BY-SA unless otherwise noted.