Felicia Steppingstone was a suspect in the murder investigations of journalist Riban Priest in Secret Knocks the Door (Case #5 of Alpha Bay) and her ex-girlfriend, forest ranger Roxie Cooper, in A New Tale of Phoenix (Case #16 of Alpha Bay) and a quasi-suspect in To Play with Fire (Case #34 of Alpha Bay) before being murdered in Apart from Significant Other (Case #37 of Alpha Bay).

28 years of age, Felicia was an actress who has blue eyes surrounded by long and wavy blonde hair. She was seen wearing two gold necklaces above a golden strapless dress and sporting a gold arm cuff on her right arm, along with a tattoo on her left arm.

In her first appearance, it is known that she had hacking skills, used hand cream and worked out.

In her second appearance, it is revealed that Felicia drank cappuccino, spoke Arabic and knew mechanics.

Felicia found herself in the red after the team discovered the victim was publishing scandals about her because she rejected his proposal. Felicia was exhausted about the fact and confronted him but nothing worked. Later, it was revealed that she sued the victim with the help of Drew Winston as she couldn't take it anymore. Anyway, she was found to be innocent after Nina Madison was incarcerated for the murder. After the trial, the team then helped her retrieving her smartphone.

A New Tale of Phoenix

To Play with Fire 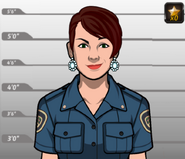 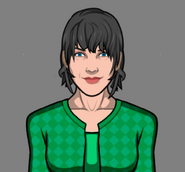 Roxie Cooper, Felicia's late ex-girlfriend.
Add a photo to this gallery
Retrieved from "https://criminal-case-official-fanfiction.fandom.com/wiki/Felicia_Steppingstone_(HR)?oldid=226591"
Community content is available under CC-BY-SA unless otherwise noted.