In her first suspect appearance, it is known that Faith drinks beer and green smooties and eats olives.

In her second suspect appearance, it is discovered that she eats steak, has traveled to Fario and knows how to fight.

Get the Finger Out

Faith became a suspect after Rosamund and the player identified her on the portrait of her and the victim. When being asked about Ryan, Faith said that he was her father, and then she asked why the team asked her that question. After Rosamund informed her that her father was found dead. She was shocked, saying that she did not know why someone would kill him as he was always kind and happy with everyone.

Faith was spoken to again after the team found out that she got mugged at the street. The player and Rosamund then asked her if she could describe her mugger, but she could not do it as she did not manage to see their face.

Faith was found to be innocent after the team incarcerated Liam O'Carrol for her father's murder. She later came to the station and told the player that someone had sent her a bloody photo of a finger. After Faith said that she was so scared that she had lost that photo in the parade street, the team rushed there to find it. 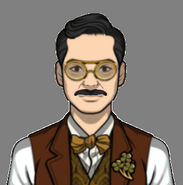