Ezekiel Bitch is the killer of his ex-girlfriend, Nodoka Kusama in Burn in Hell! (Case #11 of Grimsdale). Prior to that, he appeared as a suspect in the murder of Zachary Horvath in Work It Out! (Case #10 of Grimsdale). He also made a quasi appearance in Life is Short (Case #9 of Grimsdale).

Hamida and the player went to confront Ezekiel after they discovered that his car was used in the robberry. They met his brother Joesph, who called on Ezekiel, when questioned about it, he vlaimed he had nothing to do with the robbery, and that Nodoka asked to use his car, and he didn’t know she’d use it to pin it on him.

Ezekiel became a suspect after they were told he was the last to leave the gym. When asked if he knew Zachary, he admitted that he hated the victim, because he kept showing off. When Mia later talked about the robbery, he got mad, and demanded tge player and Mia tol leave his home.

After Lucy was arrested for murder, they went to talk to him about the robbery, where he told them to leave immediately. The team later discovered that he had Raphael’ number, due to him being in contact with two of the robber’s accomplices, they confronted him, where he denied the evidence.

Ezekiel became a suspect after Nodoka’s body was found, when they interrogated him, they confronted him about the robbery, which made him flip off, and he yelled at him, since he was sure they never found any lead of him being a suspect, and they just wanted a reason to interrogate him.

He was later placed in custody, considering he became a major suspect, after his chemistry book was found in the victim’s kidnapping scene.

Ezekiel turned out to be the killer. After trying to deny it, he admitted it after all, he told Mia and the player he never meant to kill Nodoka, and it was their fault. He told them that he was sick to the police coming to him confronting him about a robbery he never took part in, so after he saw Nodoka running away, he knocked her out, brough her to a shed, and used his chemistry skills to make a molotov cocktail. When she woke up, he started a recording on his phone, and threatened to throw the murder weapon at Nodoka if she does not reveal the name of her accomplice, but never really wanted to do so. Eventually Nodoka got mad, and kicked Ezekiel, where he accidently dropped the weapon, and he had to escape, while Nodoka died. Judge Powell sentenced him to 10 years in prison.

After he was arrested, Zoe asked for the team to find Joseph, Ezekiel’s brother, to find a family for him. Ezekiel was interrogated in his cell, and was asked if he is aware of his brother’s whereabouts. 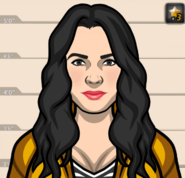 Nodoka Kusama, Ezekiel’s late ex-girlfriend.
Add a photo to this gallery
Retrieved from "https://criminal-case-official-fanfiction.fandom.com/wiki/Ezekiel?oldid=125436"
Community content is available under CC-BY-SA unless otherwise noted.