Evelyn Cunningham was a suspect during the murder of student Liam Thomas in The Goblin's Revenge (Case #15 of Rosenoque) and socialite Gwendolyn White in The Tell-Tale Heart (Case #25 of Rosenoque), as well appearing as a quasi-suspect in three other cases. She later returned as a suspect in the murder investigations of socialite Kristina de Valz in Arrow Meets the Target (Case #2 of The Mystery), supposed vampire Ambrosia Cruorem in Flight of the Bats (Case #25 of The Mystery) and old man Frederick Kregeru in A Holideath's Spirit (Case #S1 of The Mystery). She also appeared as a quasi-suspect in three cases.

As a 17-year-old student of the Howling Valley High School, Evelyn has black shoulder length hair and brown eyes concealed behind a pair of black aviator glasses. She is seen wearing a tank top with a skull and "METAL" on it in red letters, as well a spike choker.

In her first suspect appearance, it is known she has a high school lapel pin on her tank top. It is discovered that she eats sprinkle donuts, reads the Westchester Weekly and knows physics.

In her second suspect appearance, it is known that she has a scar on her cheek. It is noted that she reads Edgar Allen Poe and eats golden caviar.

No Time to Clown Around

Flight of the Bats

Daring For the Arts

To Breathe His Last

Soul of the Party 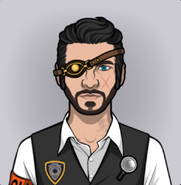 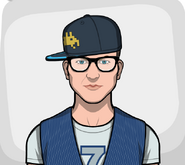 Bryce Tent, Evelyn's fiancé.
Add a photo to this gallery

Retrieved from "https://criminal-case-official-fanfiction.fandom.com/wiki/Evelyn_Cunningham?oldid=203776"
Community content is available under CC-BY-SA unless otherwise noted.