After the player finally settled in. Ben suggested the team visit The Loft for a party. To their horror, a dead body was found on the dancefloor. It was revealed to be Joel Dexter. They sent his body to Annalise. Annalise worked out that Joel's death was caused by having poison put into his drink. The drink dissolved in her drink. Annalise could work out the killer had knowledge in chemistry. After the investigation, the team could work out that Declan Brady was the killer. This was because Joel stole Declan's girlfriend, but to rub it in more, Joel posted pictures of him, humiliating him. So, when Declan found out, he tried to put a mild tranquilizer in his drink, but it killed Joel. Declan apologised, but was sentenced to 30 years in prison to be released when 48.

In the AI, Cheryl, Brendan and Dirk needed help. With Dirk being Cindy's husband, he wanted help to buy her a birthday present. So the team checked the emporium and found a broken necklace. They fixed it and returned it to Dirk. He was thankful. when speaking to Cheryl, she said she had lost a cake she was going to make for brother, Brendan. And if she didn't find it she didn't know what Brendan might do under the depression. The team searched The Loft and found it. They returned it to Cheryl. When speaking to Brendan, he said that he had lost a picture of Declan from his young age in Ireland. The team found the photo and returned it to Brendan. 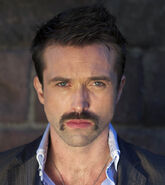 Cheryl Tenbury-Newent
Add a photo to this gallery

Retrieved from "https://criminal-case-official-fanfiction.fandom.com/wiki/Evacuate_the_Dancefloor?oldid=30873"
Community content is available under CC-BY-SA unless otherwise noted.