Ethan September is a main character featured in Season 1 and Season 3 of Criminal Case, where he serves as the Flaming Eagle Police Department's Chief Medical Examiner.

He then became a suspect in the murder investigations of his father, gang leader Joseph September in Like Fighting Snakes (Case #33 of Rosenoque) and FEPD Chief of Police Thomas Ernest in The Thorn Amongst the Roses (Case #54 of Rosenoque). He later became a suspect in the murder investigation of Oceanic community leader Linnea Nobel in Peace is Long Gone (Case #39 of The Mystery).

Originating from Chennai, India and hailing from Birmingham, United Kingdom, Ethan is the 42-year-old coroner of the Flaming Eagle Police Department who worked as a pharmacist and a lab analyst for the FEPD prior to his tenure as coroner of the police department. He has tanned skin, curly brown hair and dark brown eyes. He is seen wearing a black shirt under a white lab coat with a red peony lapel on his right side. Ethan also wears a set of silver charms consisting of prayer beads, the Hindi writing of "Om", and an elephant.

Now 45 years old, Ethan now dons a light blue collared shirt under a dark blue lab coat with a white biohazard symbol on his right side. He also wears a pair of laboratory goggles and a laboratory access badge.

Ethan is known to be analytical, thoughtful and interested in the various sciences in his field, leading him to have several projects when he's not examining murdered cadavers. He also enjoys jewelry work and blogging about scientific theories, although he has a weakness for having a good cup of tea and singing the British anthem. He enjoys having a plate of tandoori chicken with British tea and his favourite animal is the duck.

Per his first suspect appearance, he has an oil stain on his clothing. He is known to handle snakes and eat sunflower seeds.

Per his second suspect appearance, he is noted to know mechanics, take painkillers and suffer from insomnia.

As the Chief Medical Examiner (Coroner) of the Flaming Eagle Police Department, Ethan's responsibilities center around carefully examining and analyzing each murdered corpse, and informing the team of such results after a certain amount of time or a speed-up process using Criminal Case Cash. His task-wait rates vary depending on the difficulty of the task, but they all cost 1 Criminal Case Cash per 30 minutes.

Below is the list of analyses Ethan performs throughout the course of the game:

Case #1: Pebbles on the Beach

Case #2: Party Till One Drops

Case #9: Back From the Grave

Case #13: Raking Over the Ashes

Case #18: Taste Your Own Medicine

Case #19: Fight for the Rights

Case #20: The Dose of Creation

Case #21: The Wicked Witch of the East

Case #30: When the Noose Tightens

Case #39: Links of the Broken Chain

Case #42: People Have Their Connections

Case #45: Threat from the Past

Case #46: Tallying Up the Votes

Case #48: Disorder in the Court 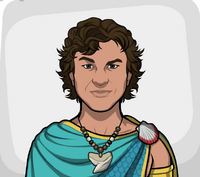 Ethan, as he appeared in Threat from the Past (Case #45 of Rosenoque)
Add a photo to this gallery

Retrieved from "https://criminal-case-official-fanfiction.fandom.com/wiki/Ethan_September?oldid=212690"
Community content is available under CC-BY-SA unless otherwise noted.