Ernest Wilson was a killer of Red Skulls leader Troy Cassidy in After The Smoke (Case #2 of Icewood). Prior that he appeared as a suspect is a murder investigation of shop owner Derek Johnson in Light Your Night (Case #1 of Icewood) and

Ernest is a 33 years old gangster with curly brown hair and black eyes.

In his first suspect appearance, he is seen wearing a white t-shirt with number "7" underneath his blue waistcoat and It's discovered that Ernest uses hand sanitizer, knows how to fight and chews gum.

In his second suspect appearance, he is seen wearing the same outfit with a gold brooch on left side oh his waistcoat and it's discovered that Ernest knows electronics, drinks beer and uses chalks. 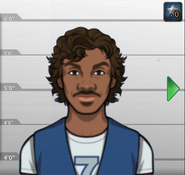 Ernest, as he appearing in Light Your Night (Case #1 of Icewood) 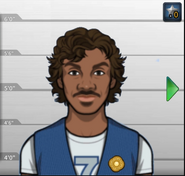 Ernest, as he appearing in After The Smoke (Case #2 of Icewood)
Add a photo to this gallery
Retrieved from "https://criminal-case-official-fanfiction.fandom.com/wiki/Ernest_Wilson?oldid=103012"
Community content is available under CC-BY-SA unless otherwise noted.