Edwin Brickenden was the victim in The Rose of Death (Case #19 of Parinaita).

"At that point in time, someone ran in to report something and told the time travellers to follow. They went outside and found the dead body of Edwin Brickenden, with a Lancaster rose in his mouth."

The killer turned out to be the victim's brother, Berry Derry.

"The team came over to Berry and questioned him about the murder. He reported that he only did it to save his brother from the Lancaster army. When asked what he was talking about, Berry said that Henry had many people murdered because of his madness, people who looked weird, people who acted weird and many other things. Berry said he heard the king plotting Edwin's murder because of his family being from Yorkshire. Berry took him out as fast as he could and made him look like a solider. But he said that his brother wouldn't stop talking about how his older brother saved him and Henry was starting to suspected something was off. In a flood of tears, Berry then went into detail about murdering his brother to stop the mad king murdering him first and that he didn't care what happened to him." 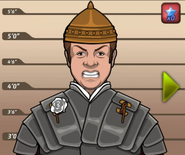 Berry Derry, Edwin's brother and killer
Add a photo to this gallery

Retrieved from "https://criminal-case-official-fanfiction.fandom.com/wiki/Edwin_Brickenden?oldid=175303"
Community content is available under CC-BY-SA unless otherwise noted.