Edit Kiss is a character which died before the events of Season 1: Grimsdale.

Edit was the late sister of Kelemen Kiss, who died before the events of the season started. She had blonde hair and brown eyes. Her hair was donned as a side ponytail, and she was usually seen wearing a grey and white shirt.

She was mentioned during the events of the case, where Kelemen told the team, that she have died two years ago, due to her nudes being leaked by her boyfriend. Edit’s boyfriend got expelled, but after Kelemen heard of Hamad’s action, he remembered that he used to go to the same middle school as his sister, and made the conclusion that Hamad must’ve convinced Edit’s boyfriend into leaking her nudes. He confronted Hamad about this, and his theories turned out to be correct, 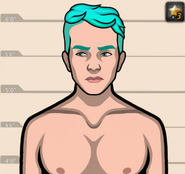 Melody Hart, Edit’s mother.
Add a photo to this gallery
Retrieved from "https://criminal-case-official-fanfiction.fandom.com/wiki/Edit_Kiss?oldid=174733"
Community content is available under CC-BY-SA unless otherwise noted.