Drew was the 40-year-old mayor of Alpha Bay. He wore a midnight blue pinstriped suit over a white collared shirt with a blue tie. He also wore a tie pin and a red handkerchief in his pocket.

In his first suspect appearance, he sported a gray scarf around his neck. It is known that Drew worked out.

In his quasi-suspect appearance, he ditched his scarf.

In his second suspect appearance, it is revealed that he wore gloves and listened to Billie Kelson.

The killer turned out to be his assistant Chloe Blanchard. 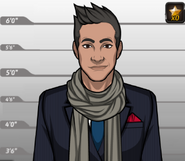 Drew, as he appeared in Secret Knocks the Door (Case #5 of Alpha Bay). 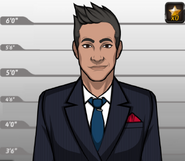 Drew, as he appeared in Turn on the Light (Case #7 of Alpha Bay) and When Mistakes Cost Life (Case #49 of Alpha Bay).
CBlanchardAlphaC50.png
Chloe Blanchard, Drew's girlfriend and killer. 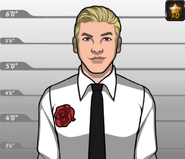 Tarot Shinebright, Drew's ex-boyfriend.
Add a photo to this gallery
Retrieved from "https://criminal-case-official-fanfiction.fandom.com/wiki/Drew_Winston?oldid=240086"
Community content is available under CC-BY-SA unless otherwise noted.