Draco is the 35-year-old CEO of Darkmoon Incorporated. He has short, messy black hair and blue eyes. He wears a black suit over a white shirt and a plum tie. He sports a five o'clock shadow and eyebags.

In his first appearance, it is known that Draco listens to electronic music and drinks gimlets.

In his second appearance, he is seen sporting an eyepiece and a scarab brooch on the left side of his suit. It is revealed that he knows robotics, takes energy pills and watches Star Wars.

Striking From the Shadows 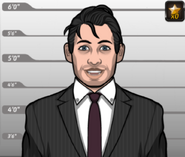 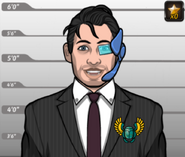 Draco, as he appeared in Turning Fiction into Reality (Case #26 of Alpha Bay).
Add a photo to this gallery
Retrieved from "https://criminal-case-official-fanfiction.fandom.com/wiki/Draco_Moonlight?oldid=207556"
Community content is available under CC-BY-SA unless otherwise noted.