Dr. Irene Geraldine Pepper was a suspect in three murder investigations in Daytide Coast. She also made one minor appearance.

Irene is a 28-year-old psychiatrist who primarily specializes in biological psychology to help patients with substance abuse, depression, schizophrenia, and eating and women's disorders, just to name a few of her duties. She has green eyes, and shoulder-length blonde hair with split ends at her shoulders. She also carries around a notebook and a red pen with her at all times. Irene dons a button-up white office jacket and a scarf around her neck. She is also seen wearing a golden pendant. In addition, she sports a pair of dark brown glasses, and wears lipstick and purple nail polish.

According to Shane, Irene suffers from mysophobia and has a caffeine addiction which explains why she carries disinfectant and coffee in her purse respectively.

In her second appearance, it is discovered that Irene knows mechanics, uses a GPS device, and knows binary code.

In her third appearance, Shane reveals that Irene is a trained fighter in Krav Maga, takes sleeping pills due to her insomnia, and took astronomy classes during her tenure in Pinefield University which she contributes her work and research to. She also sustains scratches on the left side of her neck. 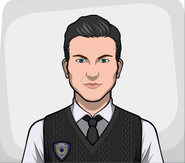 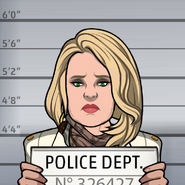 Retrieved from "https://criminal-case-official-fanfiction.fandom.com/wiki/Dr._Irene_Pepper?oldid=62069"
Community content is available under CC-BY-SA unless otherwise noted.