Down with the Queen is a case featured in Criminal Case. It takes place in the Grimsdale University district of Grimsdale.

After witnessing an anvil falling over Alicia Hussey and Ernst Klein, Mia and Hamilton immediately went to the stage to investigate. Ernst survived the attack but was unconscious and suffering from fatal injuries, while Alicia who was hit on the head, died immediately. The duo found three suspects: Aiden Evans, Vicky Lopez and Nasim Mukhailif. Cindy then approached the duo, and told them that she thinks she knows where the killer was hiding during the murder.

Cindy led them to a hidden area near the stage which she came across. She was then added to suspect list, and shortly after her, Hamida was added too. Mia and Hamilton then found out that the results of the prom vote were sabotaged to make the victim win when it was supposed to be Vicky and that Aiden ran for prom king but stepped down for mysterious reasons. Yoyo then came to the duo to tell them she got a call from Greg saying that Ernst didn’t make it.

After hearing the pitiful news, Mia and Hamilton continued investigating where they discovered that Nasim was cheating on Cindy with the victim and that Alicia was Hamida’s ex-best-friend before Mia, who betrayed her by making out with her ex-boyfriend Adrian at a graveyard. Mia and Hamilton then found enough evidence to arrest Cindy for the crime.

Cindy knew that Mia and Hamilton will discover that she is the murderer and so she didn’t deny it. She then explained to the duo she had no idea what was happening and that she was smoking cigarettes which she left on the table and suddenly she saw herself at the hidden area which she lead the duo to and when she got out of it, she was surprised by seeing anvil have fell on Alicia and Ernst. Mia was confused, she wanted to believe her best-friend, but she remembered that Nadine have said that they were already done with the protozone, yet the effects that Cindy claimed that happened to her were the same one that Samantha suffered by. This is when Rozetta came out, and told Mia and Hamilton that Cindy was lying. She then told them that she realized something similar between Nadine and the people whom the protozone developer ordered their test subject to kill. She then told the duo that at the day the protozone was stolen from the dome Nadine, Adolfo, Phoebe, Alicia and Cindy were working as actor for her Murder Mysteries live-action game and seeing that Cindy is the only one other than Nadine, who isn’t dead, this implies that she is the one who stole the protozone. Mia looked at Cindy and asked her if this was true, where Cindy showed her true colors and confirmed that Rozetta’s theory was true. Tearful, Mia was about to put handcuffs on Cindy’s rests, but was interrupted by seeing the whole team, except David and Randall pointing their guns at her, Rozetta and Hamilton. Realizing their odd behavior, Mia asked Cindy what she did to them, where Cindy smiles and revealed she dozed them with protozone and now they can do nothing but obey her orders for the rest of their lives. She then gave Mia, Hamilton and Rozetta an ultimatum: Either they let her go and survive or they try to arrest her and end up being shot down as a result. Mia didn’t want Cindy to get away for her betrayal, but she knew if they died, the team may stay like this for eternity, so she let Cindy escape from them.

After hearing about what happened to the team, David was shocked and he told Mia and Hamilton that they have to find Cindy immediately. Rozetta then approached them and told Hamilton that she’d like to have a talk with him.

Hamilton went to see what Rozetta has to say, where she told him that she may be able to cure the team, but she needs berzelium, and rare element from meotorites, in order to create something that reverses the effects of protozone. Aiden then approached them, panicking, saying that his sister is suffering a really horrible headache and he’s worried for her. Rozetta and Hamilton went to see what’s wrong with Samantha, where she told them that her head is hurting her so bad, and her vision has become purple. Rozetta thought about that and then realized that although the effects of protozone were gone from Samantha, she wasn’t fully healed and was sensitive toward berzelium and that there is berzelium nearby. Rozetta told Aaron to drive Samantha to the dome in the morning, in order for her to do tests on her to heal her, which he was going to protest against, but Rozetta persuaded him to agree before she and Hamilton started searching the area for berzelium. The duo found a purple crystal necklace, which Rozetta knew came from a pawn shop at Autumn Springs, and suspected that the crystal used is actually a berzelium crystal. After analyzing you, Rozetta found out that she was right and went with Hamilton to the pawn shop owner who sells the necklace and convinced her to show them the meteorite rock she was hiding and give it to them, in order to develop a cure for protozone.

Mia and Hamilton went to investigate the area that Cindy was hiding in during the murder of Alicia, under the orders of Chief Jones, where they found files related to protozone and noticed that there was some faded writing. The duo recovering the writing, where they found out it was a coordinate for a parking slot, meaning someone is helping Cindy escape and they told her to meet them there. The duo immediately went to the parking area written on the files, and realized they were two late, as Cindy was already in the car which was being driven by Norman Min. The moment the two saw Mia and Hamilton, they drove away.

YOU ARE NOT HAMILTON...

After finding berzelium and witnessing Cindy escaping with Norman on the car, Hamilton remembered promising Hamida that he’ll come to her dorm room after finishing the investigation. Hamilton knocked on the dorm door, where Hamida told him to come in and lock the door. After doing this, she told him to enter her room, which he did and found no one inside, when suddenly the door closed and he saw Hamida on her undergarmets, holding a whip asking him if he’s ready to have fun. Although Hamilton believed that Hamida wasn’t in a state to fool around, he didn’t want to upset him, and so he took off with blazer and tie, and started to unbutton his shirt, when suddenly his phone started ringing. He took the call, and it turned out to be chief ordering him to come to the station and help catch Cindy. Hamilton looked at Hamida, who heard the conversation as it was on speaker. And with a sad tone, she told Hamilton to go, which he did....

Sharkeisha Govender
Add a photo to this gallery 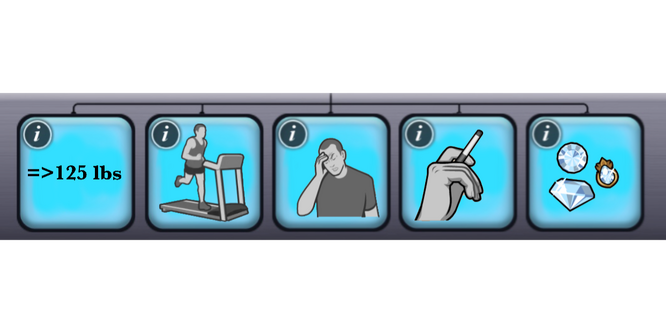 Retrieved from "https://criminal-case-official-fanfiction.fandom.com/wiki/Down_with_the_Queen?oldid=201338"
Community content is available under CC-BY-SA unless otherwise noted.