Start a Wiki
Chief Don Dourne was the chief of the Oceania Branch of the WPE in Police World Tour Edition. Don was removed from the roster after he turned out to be the killer of Hudson Farim in The 10th Man (Case #27 of PWT) and was later murdered in The Ocean Among Us (Case #28 of PWT)

Don is a 44-year old man who uses a blue and yellow hawaian shirt under a navy blue suit. He has brown short combed hair, plus blue eyes.

Don is totally unprofessional and inmature to be a police chief. His determination times in case are rare as he is a self-proclaimed fun lover and nothing stops him from enjoying the Pacific Ocean beaches. He is very clumsy and sometimes he feels ashamed for being unprofessional anytime he shows up. Don rarely helps the team and mostly, he absents the station.

Don gave a "cool-styled" and friendly welcoming to the player in his first appearance. As the case progressed, Don showed to be more and more lazy, funny but unprofessional. Winning the dislike of many members of the WPE (except Milo)

Don was flagged as a suspect in this case after his badge was suspiciously found in the Voting Site. After the team confronted him about his absence from the station from long time. After the final clues were found, everything fell into place: Don was the 10th man of the Oceanic Gang and the responsible of Hudson's murder. Don revealed that he infiltrated the Oceania WPE and became the chief, but actually, he was only helping the gang as the mole of the police, alerting them of the player's every move. However, Don's potent greed made him to develop a masterplan to kill his very own boss and get the Miracle Necklace only for him. Carmen and the player were about to handcuff the disgraced chief when he threatened the duo at gun point, forcing them to let him escape...  After a tough search, the team found Don's steps and managed to find that he already contacted a buyer for the necklace, whom was going to give him a ultra-large amount of money (enough to buy a lot of islands in Oceania). The team tracked the steps of the chief an setted their operation of catching him in Papua New Guinea before the Necklace gets sold.

During his murder investigation, Don was revealed to also have been a serial killer. His excitement for the money he was getting caused him anxiety. Thinking he was the richest man of the world and started to kill people stuffing money in their mouths. Don's greed ended to corrupt his mental state and turned in "The Golden Baron"

Connection with The Oriental Badge

During Sun on Maxzinger, Don played a prominent role during the additional investigation. Chief Zhou Linfeng confirmed her knowledge of what he did in Oceania and not only her, but a whole spy organization (in which she was volunteering) knew what he did, as it was part of a possible criminal conspiracy led by "The Oriental Badge" which consisted of turning the police chiefs of the region (and even more regions) into evil, corrupted, chiefs. After discovering a previous stay of Dourne in Tokyo, the suspicions were confirmed after finding a message from The Oriental Badge, for him. This made the team, to start a search against the Oriental Badge.

Don was found tied to a pole an eaten in an aborigin settlement in Papua New-Guinea, shortly after escaping. The autopsy confirmed that beer traces were left in the victim's wounds, but since there was no trace of alcohol on the victim's stomach, this fact pointed that it was the killer who drinked beer. Shortly after, the team found and pointed the murder weapon to be an aborigin stick used by local cannibals. The stick had traces of a popular dish in the region named "Papua salad", which made the team to write this fact on the killer's attributes.

The killer turned out to be the buyer that contacted Don for the necklace: The drug-trafficker El Capo Marin. El Capo confessed his mean plans after being confronted with evidence. El Capo was the "unknown buyer" that contacted Don to buy the necklace from him. El Capo was originally going to deceive Don and steal the necklace, but the disgraced Chief was clever and denied to give him the necklace unless by getting the amount of money for him and bring it to the very same place they were going to meet. It took weeks for the criminal, but the evil drug-trafficker managed to gather more 100.000$ millions and showed it to Don in the settlement. When the chief finally trusted El Capo and gave him the necklace, the evil drug-trafficker made his move and murdered the Chief in the settlement. By making that, El Capo obtained the necklace without paying the amount of money he got. His masterplan was to keep the money he gathered AND resell the necklace to even a higher price than the one Don demanded for the necklace, turning El Capo as one (if no the) richests men in the world. At court, Judge Adaku showed repulsion at El Capo's disturbing greed. El Capo just laughed, saying everyone will now remember him, but the Judge corrected him by giving a life-time sentence.

As the chief of the Oceania Branch of the WPE, Don appears in every case of Oceania until now, plus a suspect appearance in The 10th Man and becoming the victim in The Ocean Among Us.

He was mentioned in Sun on Maxzinger. 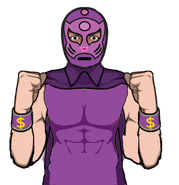 The Golden Baron, Don's serial killer persona
Add a photo to this gallery
Retrieved from "https://criminal-case-official-fanfiction.fandom.com/wiki/Don_Dourne?oldid=35823"
Community content is available under CC-BY-SA unless otherwise noted.