Dominique is a 19-year-old ex-boyfriend of the victim with short brown hair  with blue end on the top, blue eyes and a beard. He is seen wearing a black jacket with grey t-shirt underneath and a white-gray scarf. Additionally, he had birthmark under his right eyes. It it known that Dominique knows how to fight and eats cookies.

Take This Plane Down

To the End of News

The Hoax of Murders 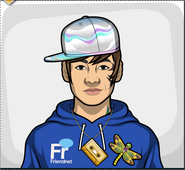 Elvin Peck, Dominique's late ex-boyfriend
Add a photo to this gallery
Retrieved from "https://criminal-case-official-fanfiction.fandom.com/wiki/Dominique_Stern?oldid=215556"
Community content is available under CC-BY-SA unless otherwise noted.