Diane Miller is a main character in Laroy Bay and Return to Laroy Bay, where she serves as the chief of Laroy Bay Police Department after serving as an agent in the first season.

She appeared as a suspect in the murder investigation of skater Dustin Vega in A Shape of Betrayal (Case #30 of Laroy Bay).

Diane is a 33-years-old agent with long ginger hair and brown eyes. She wears a black police cap, light blue vest and a plain white shirt underneath it.

Now 34 years old and serving as the Chief of police, Diane wears a black police jacket with white buttoned shirt underneath it. She also sports a black tie and silver ring necklace around her neck.

Diane is known for her honestly and loyalty. In her free time, she enjoys doing yoga and going to Krav Maga classess. Prior to her work as LBPD agent, she workes as a barista.

As the Chief of the Laroy Bay Police Department, Diane requires reports from three different "teammates" (friends who play Criminal Case and are recruited to the player's team) before she can let the player advance to the next case of Return to Laroy Bay. Besides that, she notifies the player each time they level up in the season.

Also, the player may choose Diane to join the investigation of each crime scene (in any case of Return to Laroy Bay) and provide hint bonuses. She is available as a 5-hint partner. (This feature is only available in the mobile variant of Criminal Case.) 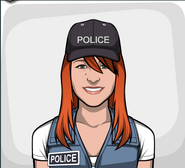 Diane, as she appeared in A Shape of Betrayal (Case #30 of Laroy Bay). 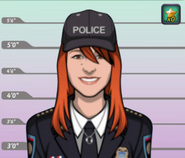