Diana Prince is a main character appearing in Season 1 of Criminal Case, where she serves as the Alpha Bay Police Department's Chief of Police.

Diana is the 42-year-old Chief of Police of the ABPD with brown eyes and long, wavy blonde hair. She is seen wearing a light pink shirt under a teal blue police jacket which has navy blue epaulets on each shoulder, logos of the department on the sleeves and has gold tips at the lapels. She also sports a pair of glasses. She is known to be a hardworking, smart and confident person.

In her suspect appearance in The Crimes of Cascade, it is discovered that Diana has read Animal Graveyard, eats pizza and drinks wine.

The Crimes of Cascade

The player may choose Diana to join the investigation of each crime scene in Alpha Bay (in any Alpha Bay case) and provide hint bonuses. She is available as a 5-hint partner. 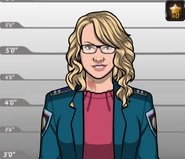 Diana, as she appeared in The Crimes of Cascade (Case #46 of Alpha Bay). 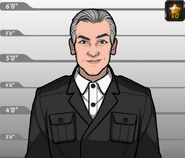 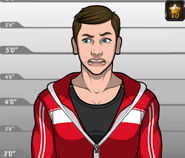 Jesse Knight, Diana's late boyfriend.
Add a photo to this gallery
Retrieved from "https://criminal-case-official-fanfiction.fandom.com/wiki/Diana_Prince?oldid=236090"
Community content is available under CC-BY-SA unless otherwise noted.