Derek Jones was a suspect in the murder investigation of bank clerk Samuel Day in Money of Blood (Case #7 of Fario) as well as a quasi-suspect in Botox Can Kill (Case #8 of Fario) until he killed Dustin Moore in 50 Shades of Green (Case #11 of Fario) and gambler Dominique Miller in Castle of Cards.

Derek Jones is a 61-year-old bank CEO with bald head and brown eyes. He wears a black tuxedo with a white shirt under it, and as well black bowtie.

He appears as quasi-suspect, in this case, to post an ultimatum to the team about his missing bills.

He was interrogated for a first time in this case after he shows up in the station to cut off ultimatum he gave to the player. He mentioned that he doesn't have anything with the murder and that he wants his bills back.

He was interrogated again when Peter informs the team about the footage he found. Derek said that he had a feud with him about bills he stole, but still denied his involvement in the crime. Before team arrested the killer, they found some missing bills and decided to give them to back to Derek. Finally after analyzing Saliva team arrested Derek for Dustin Moore homicide case. He tried to deny at first but the evidences were strong and under teams pressure, he confessed a homicide. On the trial, he repeated what he told to the player, that no one can steal and cheat him. He also added that he had his bills all the time. Judge York sentenced him to life in jail. 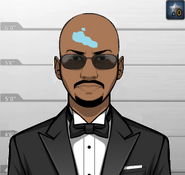 Derek, as he appeared in Money of Blood (Case #7 of Fario). 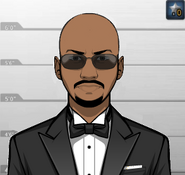 Derek, as he appeared in Botox Can Kill (Case #8 of Fario).
Add a photo to this gallery
Retrieved from "https://criminal-case-official-fanfiction.fandom.com/wiki/Derek_Jones?oldid=111436"
Community content is available under CC-BY-SA unless otherwise noted.