Start a Wiki
Derek Johnson is the victim in Light Your Night (Case #1 of Icewood).

Derek was a shop owner with a bald head and black eyes. Before his death, he wore a hunting west with crocodile teeth bracelet on his left arm. He has a piercing above his left eye and scars. Additionally, he wore a tie but the killer tore it during the fight.

He was found burned on the Main street. An autopsy report showed that the killer fights with him before setting him in the fire, which means that the killer knows how to fight.

The Killer turns out to be his Housekeeper, Steve Wood.

He said that shortly before he was (wrongly) accused for the murder, Derek and his guys kidnapped and murdered his younger sister, and then send him a full tape of the torture. After he was released from prison he found a job as Derek's housekeeper, makes him think that Steve forgot about the past. Then he said that he got a job just to make him closer and find his schemes, routines so he could kill him, as a revenge for the murder of his sister. On the trial, Judge Edward Dante said that even if he helped the community by taking down a gangster and child killer, he still took someone's life and sentenced him to 20 years jail with potential parole in 10 years. 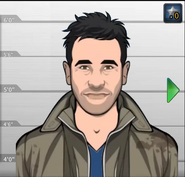 Steve Wood, Derek's killer
Add a photo to this gallery
Retrieved from "https://criminal-case-official-fanfiction.fandom.com/wiki/Derek_Johnson?oldid=101566"
Community content is available under CC-BY-SA unless otherwise noted.