Dead Bombshell is a case featured in Criminal Case. It takes place in the Fairview High district of Grimsdale.

The team went to the gymnasium, which is where the student council president was being announced. The principal went in the stage to greet the crowd, and showed off all the participants. She announced the student body president, who is none other than Hamad Mukhailif, and his VP and first lady, Victoria Lopez. Hamad thanked the people who voted for him, and was about to announce something, when all of a sudden, an explosion happened, which blew off his head. 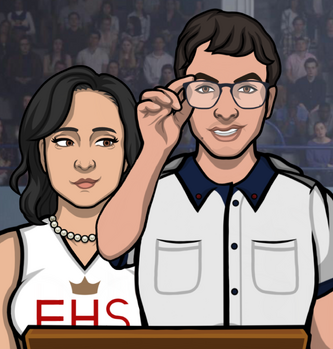 Mia and the player went to the stage where they found the corpse of Hamad Mukhailif, and the unconscious body of Victoria Lopez. Victoria was rushed to the hospital, while Hamad was sent to autopsy.

Later in the investigation Mia and the player went to check on Victoria, prior to that, they discovered 4 suspects in the investigation: Kelemen Kiss, Julian Ramis, Hamad’s sister, Hamida Mukhailif, and the art teacher Meera Abernathy, who revealed herself as his step-sister.

Victoria later called the team, telling them that she is being harassed by a drunk somphomore, who was Kelemen Kiss, so Mia and the player went to restrain Kelemen, who was catcalling Victoria, referring her as a “babe”, and complimenting her curves.

Julian Ramis, Clay’s friend turned out to be a murder, knowing he can’t lie to the team, he did not deny the crime, when asked if he killed Hamad because he told everyone he was a killer, he told them that no, and instead he killed Hamad because he killed his father, he later explained that when his father died, the cops found a 14 year old Hamad and one of his friends, in the crime scene, when asked what happened, Hamad told the police that Julian’s father comitted suicide, and that they tried to stop him, but he refused to stay alive, saying he brought a monster in this world. Because Hmad was known as the most innocent students in the school, Julian believed it, and felt guilty for what he did, but then Julian saw Hamad’s true colors, this made him figure out that his father’s death wasn’t a suicide, and that Hamad pushed him off the rooftop, and lied to the police about it. Julian tried to tell the authorities but they didn’t believe him, he confronted Hamad about this a few days before the student body president was announced, but he just laughed and mocked Julian’s father, telling him that his father was weak minded, and a coward. Julian couldn’t take that anymore, so he made a bomb, and inplanted it on Hamad’s glasses, setting the timer so that it blows off, at the exact time the student body president is announced. The judge sympathized with Julian, but was disgusted that he chose to kill Hamad in front of a crowd of teenagers, sentencing him to 15 years in prison, with a chance of a parole of 5 years, and considering he is a minor, he is allowed to be released in bail.

Clay and the player went to check on Julian in his prison cell, to make sure if he needs anything from them. He told them that he lost a locket of him and his late father in the Biology Lab, while installing the bomb on Hamad’s glasses. After they found it, Julian thanked Clay and the victim, and gave Clay his lucky charm to remember him, and gave the player his beanie.

Vicky then asked to see the player and Mia, so they can help her find a design Hamad made on a project she and Hamad were working on. After they found it, Vicky thanked them for their help.

After the team helped Julian and Victoria, a man visited their lair. Hasuro went to kiss the man immediately, after that Diego recognized him as the Deputy Mayor of Grimsdale, Joe Warren. Joe then told the team he will make them an official justice unit, and hired David Jones as the chief

Julian Edward Ramis
Add a photo to this gallery

Rosamund Wilcox
Add a photo to this gallery

Retrieved from "https://criminal-case-official-fanfiction.fandom.com/wiki/Dead_Bombshell?oldid=253761"
Community content is available under CC-BY-SA unless otherwise noted.