Daria Lynn is a main character in Criminal Case Venusville,where she serves as Weapons Expert of Venusville Justice Fighters.

Daria was interrogated after team found her DNA on victim's bag.She said that victim thought that Daria has bad influence on her son and earlier thisday,she hit her with a bag.

In the middle of investigation,Tech Town Tigers were found stealing mummies.Diane and player spoke to their leader,Daria who claimed that she doesn't know anything about it.Team put her in custody because they thought she poisoned Isabel so that they could steal mummies without being noticed.

Daria was found innocent after team arrested Lee Dupree for a murder.

In AI,team found out that Daria and her gang were planning to start biggest gang war to finally bring Melbury Cobras down.Since team was unable to convince Daria not to do it,they went to talk with Melbury Cobras gang leader.

Daria was interrogated after team found out that she had been invited to a paintball game.She said that Tarik was her good friend and that he will help them in destroying Melbury Cobras.

During the middle of investigation,Daria was shot with the crossbow in the arm.Team knew that it must be somebody from Melbury Cobras who wanted her dead.However,killer was revealed to be doctor who worked for Tech Tigers called Debby Pembroke.

Daria was interrogated after team found Juniper Cooper's body in her hideout.She said that somebody shot Juniper throught the window.When team asked her if she did it,she said that she doesn't even know who she is.

Daria was spoken to again after team found her letter she sent to Juniper.She invited her to her gang because Juniper was born and raised in Tech Town,but Juniper said that her police work is more important than stupid gang war,making Daria angry.

Daria was found innocent for 3rd time after team arrested Nathan Hardwin for a murder.

In AI,Daria wanted the team to find her blue gun.When team found it,she said that since Tobias is in jail,gang war can finally stop.Daria thanked the player and rewarded them with her hat.

The player may choose Daria to join the investigation of each crime scene (in any case in Venusville) and provide hint bonuses. She is available as a 4-hint partner. (This feature is only available in the mobile variant of Criminal Case.)

-Case #36 Win the Battle,Lose the War

Case #17 In the Limelight 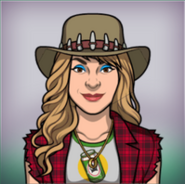 Daria, as she appeared in Small Bite (Case #31 of Laroy Bay) 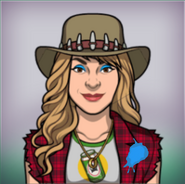 Daria, as she appeared in Painball (Case #33 of Laroy Bay). 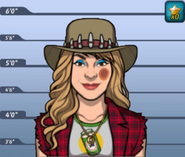 Daria, as she appeared in Win the Battle,Lose the War (Case #36 of Laroy Bay). 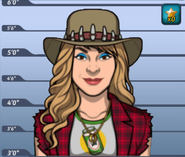 Daria, as she appeared in Brink of Disaster (Case #30 of Venusville), Act of Disloyalty (Case #35 of Venusville) and Digging Up (Case #41 of Venusville).
Add a photo to this gallery
Retrieved from "https://criminal-case-official-fanfiction.fandom.com/wiki/Daria_Lynn?oldid=191473"
Community content is available under CC-BY-SA unless otherwise noted.