Danny Moto (Jpn: 本多仁) was a suspect in the murder investigations of scuba diver Susie McAlister in Back to Water (Case #8 of Alpha Bay) and mathematician, Watery Systems' leader Noby Foreman, in Destructive Experiments (Case #14 of Alpha Bay).

Danny is a 21-year-old university student with short brown hair and brown eyes. He is seen wearing a white collared shirt with a math-imprinted black tie and a pair of black round glasses. His shirt contains two pockets, one of which contains a calculator. He sports a orange dye stain in his shirt.

In his second appearance, it is known that Danny is skilled with a crossbow, plays bingo and uses hand sanitizer.

In his second appearance, he sports a bruise on his right cheek. It is revealed that Danny has fighting skills, plays Save the World! and likes riddles. 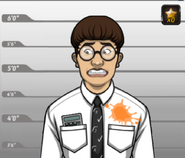 Danny, as he appeared in Back to Water (Case #8 of Alpha Bay). 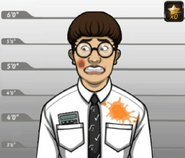 Danny, as he appeared in Destructive Experiments (Case #14 of Alpha Bay).
Add a photo to this gallery
Retrieved from "https://criminal-case-official-fanfiction.fandom.com/wiki/Danny_Moto?oldid=187083"
Community content is available under CC-BY-SA unless otherwise noted.