Start a Wiki
Danna Paula is the Ballistics Expert of the World Police Elite in Police World Tour Edition. Prior to being offered the position she was suspected of three murder investigations in the Oceania region, but she later redeemed and partnered with the player to catch a killer just before joining.

Danna is a 26-year old jeweller from the dessert known to have sold illegal jewels, however, she was once a field agent working for the World Police Elite. She has Cowboy girl look: Cowboy Hat, bone necklace, leather jacket.

In her third appearance she is covered in carbon dust and has bruises after crashing her boat.

Per Sun on Maxzinger, Danna starts wearing a blue scarf

As a member of The Oceanic Gang

Danna makes her first appearance at The Outback Shark, being flagged as a suspect for Charlie Culkin's murder. Marceau Rosebaux revealed to the player that Danna previously worked on the WPE but left it to become an illegal jeweller much to Marceau's disgust. As the story progressed it was discovered that Danna was involved in a theft plan of Charlie named "The Miracle Necklace": it consisted of crafting a necklace composing of the most expensive and valuable jewels, stolen from different parts of Oceania.After Charlie's death, Danna managed to retrieve the necklace from him and after lying to the WPE and the player, she brought it to New Caledonia.

During this case, it was revealed that the group Danna was working for was called The Oceanic Gang. The team didn't fell into Danna's trap and found the necklace in a beach. After finding a death threat from the gang for Danna, it was known that her life depended on retrieving the necklace once again and bringing it to the Gang. In a brilliant idea, Milo tried to deceive Danna with the necklace in exchange for exposing the Oceanic Gang... but it terribly failed as Danna tricked Milo with a fake gun, snatching the necklace from him and vanishing from the chamber in a smoke bomb.

After the team took down the gang's leader, he revealed that he was the one manipulating Danna on making all those moves for the gang, like ordering her to lie to the team or to kill Milo (which she refused, explaining why she shot him with a paint gun) the remaining gang members threatened to kill her in revenge, making the team to develop a plan to save her on Fiji.

Redemption and escape from the Gang

Danna was once again flagged as a suspect after the team found the corpse of another gang member: Sugilite Moretti. Danna confessed that both she and Sugilite crafted a plan to escape from the gang's HQ, Danna succeeded but Sugilite was murdered after she succeeded too. During her second interrogation, she also confessed her whole motives of becoming a burglar:

Danna's parents became sick of cancer 2 years ago and she was desperate of finding the cure for them. Danna's police salary wasn't enough to help them and the sickness of her parents became worse every month. So, Danna decided to accept an offering from the Oceanic Gang of smuggling some jewels for them. Danna became an illegal jewel smuggler and left the WPE police. Danna claimed that when the Gang decided to include her in the evil scheme of "The Miracle Necklace", she wanted to refuse but she didn't had an option. Danna concluded her sad history, crying, Marceau forgave her and hugged her, compassionate.

Following this, things didn't turned well as her sister (who was also a burglar along with her) was found to be a murderer and her parents died after losing the battle against cancer. However despite the tought moments, Danna never losed her faith and even managed to return with her husband: Marceau Rosebaux

Danna decided to partner with the player in the last case in Oceania. After a lot of investigation, Danna showed bravery and determinist and even managed to help the player on arresting the murderer, finally putting an end to the gang

After the investigation, Marceau returned to the station, saying that he managed to dismise all charges against Danna and even wanted to offer her a job on the official WPE along with the team. As everybody accepted, Danna got hired as the Ballistic Experts and after showing his grattitude to God, hugged her husband and packed everything, she was ready for her next journey with her new team. 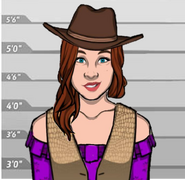 Danna as a suspect
Add a photo to this gallery

Before joinning the WPE, Danna appeared on all cases in Oceania except for The 10th Man, in which she only got mentioned.

Danna's design was made by Bordacris, for information about creating characters contact here.

Retrieved from "https://criminal-case-official-fanfiction.fandom.com/wiki/Danna_Paula?oldid=35522"
Community content is available under CC-BY-SA unless otherwise noted.