Clint Russo (1964-2021) was a main character featured in Criminal Case Secrets of Yahatu, where he served as Yahatu Archaeological Association‎'s chief.

Born in Montreal, Canada, Clint was a 56-year-old chief of YAA with blue eyes, short brown hair and brown beard. He wore a light blue, buttoned-up shirt under a black overt vest with a black pistol holstered inside.

Clint was known to be strict and extremely hot-headed, but most of the time he was friendly and nice. Father of archaeologist Rudy Russo. After his wife's sudden death, he raised Rudy all alone.

In his second suspect appearance, he has a bruise on his forehead.

The player may choose Clint to join the investigation of each crime scene (in any case in Secrets of Yahatu) and provide hint bonuses. He is available as a 5-hint partner. 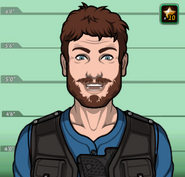