Start a Wiki
Clay Westwood was a suspect in the murder investigations of street hustler Georgia Ward in You Steal,I Kill (Case #4 of Back to Past) and aristocrat Aila Shropshire in Like a Thief in the Night (Case #6 of Back to Past).Prior that he appeared as a quasi-suspect in Dead on Tracks (Case #3 of Back to Past)

Clay is a 39-year-old cowboy. He has brown hair and wears a brown cowboy hat. He also dons a blue shirt underneath a leather vest, as well as a brown and yellow poncho over the vest. He is seen with a cigar in his mouth.

Minerva Highmore said that she had spoken with some passengers about the kidnapper,and most of the descriptions match with a cowboy Clay Westwood.Team brought Rose to go with them.After interrogating Clay,he said that he didn't do it and that he is only a cowboy.Minerva said that he could be telling the truth judging by his facial expressions,but he is still suspicious.

Clay became a suspect after his blood was found on victim's handkerchief.He said that he used that handkerchief after he got cut.He also claimed that he doesn't know who Georgia is.

Clay was spoken to again after team found threatening letter from him to Georgia.He said that she was a witch who was stealing his food and his weapons only to sell them for higher prices.

Clay was found innocent after team arrested Ethel Spencer for a murder.

After the trial,team spoke to Clay Bagner after his name was found on weapon packages and Clay claimed that he was only a teen and that it's not his.Rose analyzed weapons and said that weapons belong to Clay Westwood,not Bagner.When team spoke to Westwood about this,he said that he needed them for his own protection and safety,not for robbing banks and hijacking trains.Team didn't believed him and decided that they will keep an eye on him.

Clay was spoken to again about a ''THANK YOU'' letter he sent to Aila.He said that she helped him to ask her friend out on a date and that he is thankful to her. 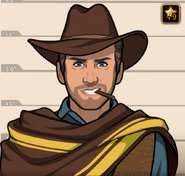 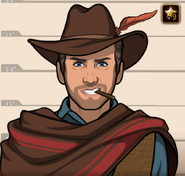 Clay, as he appeared in Like a Thief in the Night (Case #6 of Back to Past).
Add a photo to this gallery
Retrieved from "https://criminal-case-official-fanfiction.fandom.com/wiki/Clay_Westwood_(BTP)?oldid=108273"
Community content is available under CC-BY-SA unless otherwise noted.