Clara Gerson was a suspect in the murder investigation of her boyfriend, Charlie Green, In the case Lightest Nights (Case #1 of Parinaita) and in the murder of both Charlie Queens and Duncan Newton where she was the killer and revealed that she was the mastermind behind the gang.

the Clara became a suspect when she found her boyfriend murdered at the New World Point's port. (In chapter 1) as she appeared very upset about the murder of her boyfriend. However it became clear that Clara was upset about her boyfriend cheating on her with one of the Looper Rochester 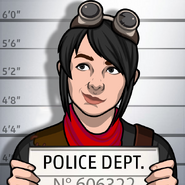