Cindy is a now 20-year-old University student with long blonde hair and blue eyes. She wears a white tank top with a blue overalls over them. She also wears a silver flower necklace.

Wound on my Heart

Cindy became a suspect after she lead team to a body.She said that she didn't knew the victim,only thing she knew is that her uncle knew him.

Cindy was interrogated again after team found proofs that she is in the Melbury Cobras.She said that her uncle convinced her to join them to take full control of Santsey Banks.She also claimed that her uncle wants a revenge on the victim and that she doesn't know the reason.

Cindy was proven innocent after team arrested Amna Reem for a murder.

Cindy became a suspect after team found her university book on crime scene.She said that she loves playing paintball with her friends after classes,but she stoped because her uncle wants her to become badass gangster.

Cindy was interrogated after team found restraining order Tarik Reem had against Cindy.She said that he didn't let any Melbury Cobras in paintball arena and that made her mad.

Cindy was proven innocent once again after team arrested Debby Pembroke for a crime.

Cindy was interrogated after team found drawing of Junipre with Cindy's signature.Cindy said that since she finally escaped from gang war and her uncle's crazy plans,she can do what she trully wants,draw.She said that Juniper was a perfect model,so she decided to draw her and Diane.She gave Diane her drawing.

Cindy was spoken to again after team found her necklace on crime scene.She said that she was just passing by Tech Town Tiger's hideout,when she heard a shot.She then ran away and dropped her necklace

The End of Times

Game of Mice and Men 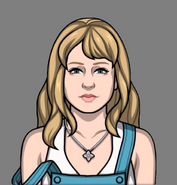 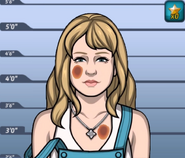 Cindy, as she appeared in Win the Battle,Lose the War (Case #36 of Laroy Bay). 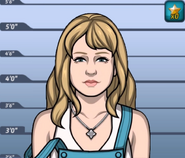 Cindy, as she appeared in The End of Times (Case #56 of Laroy Bay). 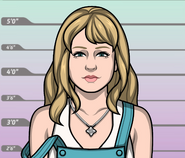 Cindy, as she appeared in Game of Mice and Men (Case #14 of Return to Laroy Bay). 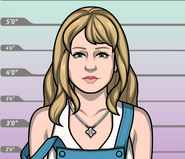 Cindy, as she appeared in A Leap in the Dark (Case #18 of Return to Laroy Bay).
Add a photo to this gallery
Retrieved from "https://criminal-case-official-fanfiction.fandom.com/wiki/Cindy_McMinn?oldid=205101"
Community content is available under CC-BY-SA unless otherwise noted.