Chloe was found dead at the bus station with a multiple stab wounds, while her jacket was found at the university with a lemonade stains left by her killer. Coroner's reports shown that Chloe's killer killed her instantly by stabbing her straight into the heart, but that rest of the stabs and removed jaw a killer's joy. also she concluded that she was killed probably by a screwdriver.

The killer turns out to be... 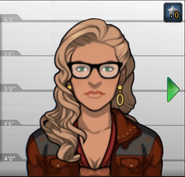 Elise Fosse, Chloe's girlfriend
Add a photo to this gallery
Retrieved from "https://criminal-case-official-fanfiction.fandom.com/wiki/Chloe_Caronvic?oldid=119992"
Community content is available under CC-BY-SA unless otherwise noted.