Cheryl, being a coroner, wears a white lab coat. Cheryl has light brown hair which are short in length. Cheryl also wears a gray shirt beneath her lab coat. Cheryl is known to be a party girl, loves to make jokes and puns, and has a snarky personality. Her blood group is noted to be O+.

After the player reached Pacificburgh, they were greeted by Chief Jason Frezier who introduced the player to Michael Parker. Michael took the player to take a tour of Financial Center - only to find a body of a dead Nina Hunt in a shopping mall. The body had to be sent to Cheryl Turner, who revealed the murder weapon and an attribute about the killer.

After Raphael Soza was arrested for the murder of his uncle, Tim Hale wanted advice from the player because he was madly in love with Cheryl. He and the player went to the warehouse Cheryl visited earlier and found Ginger's bag. An analysis of her phone revealed that she wanted Cheryl to have a butcher's at the warehouse. Ginger said that she was supposed to meet Cheryl at the docks, so the team went there, only to find some torn paper. The paper revealed that she was also in love with Tim Hale, giving Tim the courage to ask her out, and the two started dating.

Abducted by The Vipers Edit

After Angel Martinez's trial, Tim Hale was worried that he couldn't find Cheryl. Chief Frezier told him that she went to the parking lot, but Tim decided to go to that place to ensure her safety. The chief decided that Tim wasn't to change his mind, and let him go. Alarmingly, Cheryl's phone was found broken. It revealed that Cheryl went to the homeless camp after the parking lot.

In the homeless camp, a prostitute Ginger told the team that Cheryl was seen at the subway. The team rushed there, and found a handkerchief. The handkerchief was contaminated with saliva, about which Dallas Henry told that it was from Cheryl's mouth. Some of the exclusive ink was also found which was usually used by vipers to make their tattoos. Elana Siegel decided to come with the player to talk to Ash, fearing that Tim would get emotional. Elana told Ash Bison that the coroner was kidnapped and if The Vipers were involved, they would be in big trouble. Ash told the team that he had nothing to do with Cheryl's abduction.

Back at the station, the team reported what had happened to the chief who was worried. He told Tim to try to track The Vipers' base so that they can raid on it. However, before Tim could even start his computer, Bart called the headquarters saying that he tracked the Viper Headquarters.

Cheryl did not do the autopsy because she was kidnapped by The Vipers. After the hard work, Tim found the coordinates of a secret bunker under the headquarters. There, they found Cheryl Turner. Cheryl thanked the team for rescuing her, and and stood aside while the team hunted for clues. A Rhean note was found, which asked Cheryl to turn Tim to drugs and latter to use the dangerous cocaine drug on him, so Cheryl was flagged as a suspect. TIm did not believe this, and insisted that Cheryl was innocent. Cheryl told the team that she could not imagine harming Tim.

Cheryl was spoken to a second time when her fingerprints were found on a drug bag in Bart's house. When asked if she possessed drugs, she said she didn't: The Vipers forced her to take them when she was kidnapped. She resisted, but they made her take a lot of it. She threw the drug baggie outside the window, where Bart probably caught it and took it home.

Cheryl was found to be innocent when the team incarcerated Ginger for Bart William's murder.

As the Chief Medical Examiner (Coroner) of Pacificburgh Police Depoartment, Cheryl's responsibilities center around carefully examining and analyzing each murdered corpse, and to inform the team of such results after a certain amount of time or a speed-up process using Criminal Case Cash. Her task-wait rates will vary depending on the difficulty of the task, but they all cost 1 Criminal Case Cash per 30 minutes. Cheryl's duties are subject to change without notice.

Below is the list of analyses Cheryl performs throughout the course of the game:

Case 3: Sins of Our Fathers

Case #5: Hooked Up on Death

As one of the main characters and the Coroner of the police department, Cheryl appears in every single case of the World Edition given the requirement of conducting autopsy on slain bodies.

Appearances as a Quasi-Suspect Edit 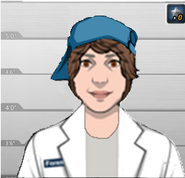 Cheryl, as she appeared in Death Meth (Case #8 of Pacificburgh).
Add a photo to this gallery

Retrieved from "https://criminal-case-official-fanfiction.fandom.com/wiki/Cheryl_Turner?oldid=38046"
Community content is available under CC-BY-SA unless otherwise noted.