Hamilton and Hamida went to the food tent to grab some food, after Katherine presented the mayoral candidates. There, they found Charles dead, with his stomach open, and all his organs out of his body.

The killer turned out to be Katherine Votjka. When the duo came to arrest her, she didn’t deny it, and just pointed out how she underestimated them. Hamida asked her whether she did it for the Anoterous, where Katherine laughed, and claimed how she and her friends are way stronger than the Anoterous, and that they told her to kill Charles, in order to humiliate The Anoterous, and show them that they are a bigger threat, than they once thought. She further explained, that it was one of her friends who shot her, on her arm, in order to make her seem less suspicious to the police. The duo asked Katherine, who are these friends of hers, where she told them the time of questioning is over. Judge Powell sentenced her to life in prison, with no parole.

Charles is seen in a meeting room with Athena and Joe Warren waiting for Rozetta to arrive. Once she did, he went to her and gave her a kiss on the lips, and sat back down, where they all started discussing about a criminal organization of demigods called “The Anoterous”, where he mentions that he recently found out that the leader hired 9 of his members as assassins to kill mortal pagans.

While Mia and the player were interrogating Cynthia, Charles came up and asked who are the people Cynthia was talking to. Once he learned that Mia and the player were cops, he got mad that they were accusing his sister of a murder, and started scolding them, after they gave up, he told Cynthia not to be late for her shooting lessons.

After Cynthia and Louis were evacuated from the burning bank, Cynthia and Louis were sent to the hospital, when the team were speaking to Cynthia, Charles barged in her hospital room with his girlfriend, Rozetta Prince, and gave Cynthia a tight hug, and then started scolding her about being in the bank, claiming that Cynthia’s fiancée Louis is a bad influence, and once he learnt that it was actually because of a job, he got mad at her boss and wanted to go to Cynthia’s workplace to argue with the boss, but Rozetta convinced him not to.

After the killer was revealed, Cynthia asked to see the player and Mia, when they asked her what it was for, it was Charles who told them, that Cynthia lost hers and Louis’ wedding rings in the bank, and that it was “no big deal”.

While Mia and Hamilton were recapping the case, Charles arrived to the wedding party, and greeted them, where they made him a suspect. The duo witnessed a scene of Cynthia scolding Charles for missing the vows, and for wearing a funeral attire to her wedding, before Charles started speaking with them. The team informed him, that an Anoterous agent, Nicki Nale, have been murdered, without telling him that she was planning to kill him.

The duo spoke to Charles again, after learning that he knew way before them that Nicki was an Anoteros, and that she was also planning to kill him. He told them that he didn’t tell anyone, since he did not want to worry Rozetta, and that he was planning to pin down the victim once she tries to kill him.

After the killer was killed by Hera, Charles came to ask Mia and Hamilton for a favor, but was interrupted by Louis. Charles started arguing with Louis, but was stopped by Cynthia. Mia and Hamilton went to speak to Charles, where he asked them to investigate the news station, to find something belonging to the killer, and analyze it, since he suspects that the killer was involved in shady activities. After Clay analyzed the contents of Victor’s briefcase, Charles’ suspicions were revealed to be false, where he apologized to the duo for wasting their time.

Charles became a suspect, after Joe revealed that the victim, was their friend. When spoken to, Charles should his sympathies, toward both Joe and Katherine. He was later talked to again, after Diego, Hamilton and Clay, mistaken Charles on threatening the victim, when he was warning him, since he learnt the victim knew about The Anoterous, and was planning to make a scoop of it. He was revealed to be innocent.

Diego and Hamilton went to talk to Joe Warren, there he told them that he suspects Charles is hiding something from him and Rozetta, and he would like the duo to search the victim’s apartment, to see if he left anything behind. After searching the apartment, the duo found Charles’ phone, but just when they were about to leave, Charles came into the apartment and saw them holding his phone, and demanded that they give it to him, and asked for an explanation. Diego and Hamilton told him that Joe suspects he is hiding something, Charles went silent for a moment, and then told them that he thought of a theory, and is researching to know whether it was true or not. The duo asked him to tell them, where he simply told them, that he’ll do so, when the right time comes. 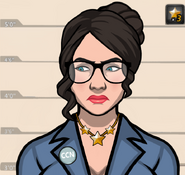 Cynthia Leroux, Charles’ sister.
Add a photo to this gallery
Retrieved from "https://criminal-case-official-fanfiction.fandom.com/wiki/Charles_Rayman?oldid=181067"
Community content is available under CC-BY-SA unless otherwise noted.