Satyr Chad Edwards was a suspect in the murder investigation of his friend, Isaac Hemsworth, in The Hanging Trees (Case #45 of Grimsdale), before being revealed as a satyr and the killer of Willow Rose in I’m All Ears (Case #48 of Grimsdale), where he was killed during his arrest.

Chad became a suspect after a selfie of him with the victim was found in the victim’s camera memory. Chad was shocked of Isaac’s death, and was confused when hearing that they found him hanged on the tree, as Isaac was pretty popular in both school and social media which made the possibility of him committing suicide pretty low. The duo then learned that the death was indeed a murder.

Chad was spoken to again after learning that Isaac dated his sister. Chad expressed his anger over the situation and swore that he won’t led his sister speak to another guy ever again, where Randall gave him a stern talk about respecting his sister’s choices.

While recapping the case, Diego and Hamilton heard some sounds, they decided to check it out and the noise turned out to be from Chad Edwards. Chad was questioned about why he is at the fair, where he revealed that he was a huge fan of the victim and was spying at her, but sadly he didn’t witness the murder as he was distracted. He was then questioned again after a collage he made of the victim was found, and he was shocked and disappointed upon hearing that the the victim threw it in the bin. In the end, Chad turned out to be the killer.

After multiple attempts of denying the crime, Chad gave up and confessed, revealing he killed Willow because she overheard him and his sister talking, and that she knows what they truly are. After the confession, Chad pulled off his head, showing two horns on his head and then his shoes showing off his hooves. Diego and Hamilton immediately realized that Chad was a satyr and that since Lisa is his sister, she must be a nymph or a dryad, the female counterparts to a satyr. The duo asked Chad whether his sister was the dryad of immortality, in which Chad confirmed that she is. The duo then begged him to show them to his sister as they need to talk to her, but Chad who was very protective of his sister assumed that they must want to capture her, and so he attacked Diego, causing a bleeding on his head. The satyr then went insane and decided that he will kill both Hamilton and Diego. The satyr was about to attack Hamilton, but before he could reach him, Diego (while holding the bleeding) pulled out his gun and shot the satyr right on his head, killing him instantly. 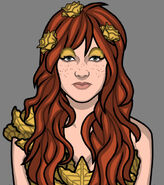 Lisa Edwards, Chad’s sister
Add a photo to this gallery
Retrieved from "https://criminal-case-official-fanfiction.fandom.com/wiki/Chad_Edwards?oldid=205812"
Community content is available under CC-BY-SA unless otherwise noted.