Casey Walter was a suspect in the murder investigation of her boyfriend, golfer Johnny Howard in Classic Murder (Case #2 of Alpha Bay).

26 years of age, Casey has green eyes and short red hair. She dons a black party dress and sports red lipstick and golden earrings. It is known that Casey is right-handed, drinks Bloody Mary and uses Friendnet.

Casey appeared as a suspect after the team found a wallet of the victim from where they learnt that she was the victim's girlfriend. She said that the victim had become depressed after the golf tournament, but she didn't know why. Later she was spoken to again after the team learnt about the recent events that took place in the diner about the victim. However, she was found to be innocent after Ricky Tipton was arrested for the murder of Johnny Howard.

Post-trial, Casey asked the team to find out why Johnny cheated in the final match. Then the team could find out that Roger Spitfire and his gang was behind it since they forced but helped Johnny to do so to get money from him for a very special work. 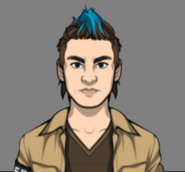 Johnny Howard, Casey's late boyfriend.
Add a photo to this gallery
Retrieved from "https://criminal-case-official-fanfiction.fandom.com/wiki/Casey_Walter?oldid=161071"
Community content is available under CC-BY-SA unless otherwise noted.