Camille Yawisai is the victim in Holy Shoot! (Case #8 of Grimsdale).

Camilla was a 23 year old bank cashier, she had long black hair, and a pair of black eyes. At the time of her death, she wore a crimson rose over her hair, and red lipstick, she also wore her bank cashier uniform: A white dress shirt, with a purple scarf, and a short black skirt.

Camilla was found in the bank vaults with a bullet on her head, when sent to autopsy, Hasuro said that he couldn’t find any substances on the body, since the killer never touched it, but the fact that they succeeded at shooting the victim on the head, proves they are trained on using a gun.

After collecting enough evidence, the team arrested Nodoka Kusama for the crime, she denied it, but later confessed. She said that she killed to silence her after she caught her robbing the bank, and explained that her job as a cop didn’t give her a lot of money, and that she wanted to live the flashy life, like the one celebrities do, so she made up a plan, and broke into the bank to steal as much money as she can, but the victim saw her, so she shot her on the head. Judge Powell did not like what she heard, and sentenced her to life in prison with no parole, for being a dissapointment to the Justice system. 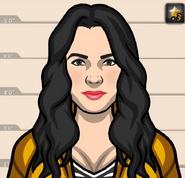 Nodoka Kusama, Camilla’s killer.
Add a photo to this gallery
Retrieved from "https://criminal-case-official-fanfiction.fandom.com/wiki/Camilla_Yawisai?oldid=115621"
Community content is available under CC-BY-SA unless otherwise noted.