Callum Watson (1999-2019) is a main character featured in Rusthollow, where he served as the Head of Forensics for the Rusthollow Justice Division.

He became a suspect in the murder investigations of his girlfriend, student Ruby Branford, in The Noose is Hanging (Case #19 of Rusthollow) and convict Clifford Kent and cameraman Kshipra Bhardwaj in The Darkness is Here (Case #54 of Rusthollow). In a tragic turn of events, he was murdered in A Western War (Case #60 of Rusthollow).

20 years of age, Callum has short blond hair and wears a white lab coat similar to the one his mother wears.

The player first meets Callum with his mother, Irene Watson while they are examining the weapon used to kill Scott Bristow. When Irene breaks into song, Callum apologises for her terrible singing and reminds her about the analysis, to which she tells Jayden Chase and the player the results of her analysis.

Callum's killer and the leader of COBRA was then revealed to be disgraced Branford family matriarch Marnie Branford.

Marnie laughed at the accusations before finally confessing that the Branford family had always been in charge of COBRA, passing it down generation by generation. She commented on how COBRA was right and the only way to ensure a future of peace. Jayden quickly angered and confronted the woman on killing Callum. Marnie admitted that she and Charles arrived at the warehouse to plant the bombs and kill the team, however, while they were placing the bombs, they were interrupted by Callum who spotted them in the act. Marnie aimed her gun at him and ordered him to be quiet otherwise she would shoot. Realizing what they were doing, Callum tearfully refused and screamed for the team to run. Upon him warning the team, she shot him in the heart causing him to fall to the floor. Callum weakly promised that they'd never win with his dying breath before succumbing to his injuries.

As the Intern of the Rusthollow Justice Division, Callum has the responsibility of taking care of all the necessary physical, biological, and/or clinical analyses, and to inform the team of such results after a certain amount of time or a speed-up process using Criminal Case Cash. His task-wait rates will vary depending on the difficulty of the task, but they all will cost 1 Criminal Case Cash per 30 minutes.

Below is the list of analyses Callum performs throughout the course of the game:

The player may choose Callum to join the investigation of each crime scene and provide hint bonuses. He is available as a 2-hint, level-10 partner. 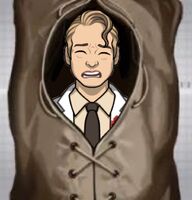 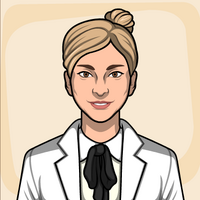 Irene Watson, Callum's mother.
Add a photo to this gallery
Retrieved from "https://criminal-case-official-fanfiction.fandom.com/wiki/Callum_Watson?oldid=161004"
Community content is available under CC-BY-SA unless otherwise noted.