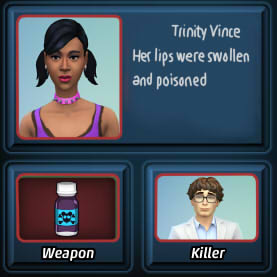 Burning Lips is the third fanmade case of Agunachopace. Is also the third case of the Nice Land district in the fictional city of Little Hollow.

The victim was a High School student named Trinity Vince. She technically killed herself when she placed poisoned lipstick on her lips, turning then bigs and make them exploded. The killer was her neighbor, Mahem Spolosky, who was a very famous scientific too.

Trinity was a girl who did not care about others, only herself. So people began to despise her. In addition, she listened to his music very high and the whole neighborhood could hear. His murderer, Mahem, not stand this situation and decided to poison her.

In court, Mahem Spolosky explain the court than annoying and ignorant people like Trinity must be changed or be eliminated. He was sentenced to life in prision for his inhuman statement, with chance of parole after 30 years.

Retrieved from "https://criminal-case-official-fanfiction.fandom.com/wiki/Burning_Lips?oldid=12769"
Community content is available under CC-BY-SA unless otherwise noted.