Bucky Johnson was a suspect in the murder investigations of four people. Prior, he appeared as a quasi-suspect in Mow The Lawn (Case #4 of Patriot City).

Bucky is a 29-year-old time traveler. He is seen wearing a dark blue shirt underneath a dark orange vest and a gray cap. Additionally, Bucky is seen holding a stack of newspapers.

In his first suspect and quasi-suspect appearance, he disguised himself as a newsagent. It is known that Bucky is a runner.

In his third suspect appearance, it is discovered that Bucky is a survivalist and eats mint.

In his fourth suspect appearance, it is noted that Bucky has a cough, eats tofu and plays Link 4.

How To Kill a Rich Man

Bucky became a suspect once again after David and the player found a torn photo of him and the victim. Bucky revealed that he is Matthew's cousin. When being informed of his cousin's murder, Bucky burst into tears, saying Matthew was like a brother to him.

Bucky was found to be innocent for the fourth time after Mindy Featherbrook was incarcerated for Matthew's murder. Soon after, the pair found out that Bucky was working as a time traveler for Patriot City Time Travel. Confronted about being a time traveler, Bucky played dumb until Courtney showed him his ID tag. Bucky sighed, revealing that working as a newsagent was a disguise. Questioning why he didn't tell them about his job before, Bucky explained that he wanted to hide from the resistance and if they found him, they will kill him. He then tells the pair to keep it a secret before leaving. 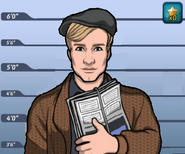 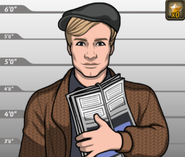 Bucky, as he appeared in Burying Your Coffin (Case #8 of Patriot City) and How To Kill a Rich Man (Case #14 of Patriot City).
Add a photo to this gallery
Retrieved from "https://criminal-case-official-fanfiction.fandom.com/wiki/Bucky_Johnson?oldid=229871"
Community content is available under CC-BY-SA unless otherwise noted.