Bryce Tent was a suspect during the murder of student Hendry Athol in Lost by the Bell (Case #16 of Rosenoque) as well as being a quasi-suspect in Disorder in the Court (Case #48 of Rosenoque). He later returned as a suspect in the murder investigation of artist Edson Balzer in To Breathe His Last (Case #35 of The Mystery).

Lost by the Bell 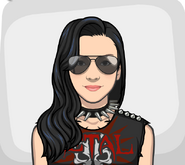 Evelyn Cunningham, Bryce's fiancée.
Add a photo to this gallery

Retrieved from "https://criminal-case-official-fanfiction.fandom.com/wiki/Bryce_Tent?oldid=203672"
Community content is available under CC-BY-SA unless otherwise noted.