Start a Wiki
Bruce Globon was a suspect in the murder investigations of US Army Colonel Miller in Shot of Duty (Case #27 of Laroy Bay) and his cousin, makeup artist Miranda Globon in Lump in your Throat (Case #1 of Return to Laroy Bay).

Bruce is 31-year-old scientist working for US Army. He has short brown hair and brown eyes. He wears lab goggles, white lab coat with blue shirt and blue stripped tie under it.

Bruce was interrogated after team found his fingerprints on victim's hat.He said that he touched his hat when he found the body.

Bruce was interrogated again after team found his broken goggles in Colonel Miller's office.He said that he and Miller had small fight and Bruce broke them due to anger,but they said sorry to each other.

Bruce was found innocent after team arrested Ray Freeman for a crime.

Lump in your Throat 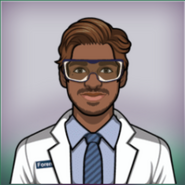 Bruce, as he appeared in Lump in your Throat (Case #27 of Laroy Bay). 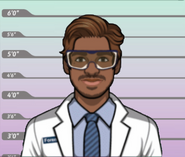 Bruce, as he appeared in Lump in your Throat (Case #1 of Return to Laroy Bay).
Add a photo to this gallery
Retrieved from "https://criminal-case-official-fanfiction.fandom.com/wiki/Bruce_Globon?oldid=193985"
Community content is available under CC-BY-SA unless otherwise noted.