Brock Perry is the killer of Fairview High Student, Alexei Smirnov in All Boli Out (Case #1 of Grimsdale). He later escaped prison, just to be killed in No Escape For Death (Case #23 of Grimsdale).

Diego and Hamilton, wanting to search for Brock, who escaped prison alongside Trish and Polly, allowed Astrid to sniff his tank-top so she could lead them to him. They followed her into the brothel, where they found Brock. However, he had a candlestick holder shoved through his eyes, killing him. The duo sent his body to autopsy, where Hasuro confirmed that for someone to take down a man of Brock’s size, even if they had a weapon, they need to be physically fit. Furthermore, he found grease on the victim, which was analyzed and it turned out to be meatloaf

Trish having been arrested for murder before, confessed straight away, saying that she killed Brock, because he didn’t truly loved her, and wouldn’t let her in his cult. She told them that Polly and Brock were in a cult called The Anoterous, and they told her stories of they’re murders as they trusted her. When they were planning to escape a week ago, they offered to let her be involved. She asked Brock if they manage to escape would he let her join his cult, which he refused. This angered Trish but she bit her anger. However, after they escaped, she found out that Jennifer was in the cult. Blinded with rage, due to the fact that Brock allowed her worst enemy in the cult, but not her, she suggested they hide in the brothel, and stabbed his eyes, with the candlesticks. Thanks to Trish already having a life sentence, she was simply sent back to prison with no trial, but had her chance for a parole removed.

Brock was interrogated due to the fist fight he had with the victim. Brody laughed, saying that the victim deserved his fate, and that he was glad that he died, making Diego disgusted.

He was later interrogated agian due to his threat to the victim, where he simply said that his motive in the threat is obviois and that he wanted to silence the victim from reporting him for bullying him.

Overall, the killer turned out to be him, upon admitting to the murder, he told Diego and the player, that he killed Alexei because caught him injecting steroids on himself, to help strengthen his muscles and in- and then as soon as Brock said “in-“, the scene switched to Vanna Alabama on a wrecking ball singing, and later switched back to the arrest, so now thanks to Vanna, we don’t know the other reason ehy Brock was on roids, anyways back to the point, Brock also said that Alexei was going to snitch on him, which is why Brody was going to beat him up, and that when he sent the victim a note saying “don’t tell or else” it wasn’t about the bullying, but the steroid use. Diego was absolutely disgusted by Brody’s motive, because not only did he stop Alexei from doing the right thing, but also for him using steroids, to bully people who are actually natural, simply for being skinny or fat. Judge Powell sentenced him to life in prison with no parole. 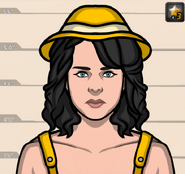 Gilly Gadot, Brock’s ex-girlfriend
Add a photo to this gallery
Retrieved from "https://criminal-case-official-fanfiction.fandom.com/wiki/Brock_Perry_(Grimsdale)?oldid=177616"
Community content is available under CC-BY-SA unless otherwise noted.