Brendan Westcliffe is the district attorney for the city of Acropolis. He usually works with the police when it comes to business disputes that seem rather suspicious in the city.

Brendan is of forty-eight years of age. He is of Caucasian descent, fit-figured, has short greying blond hair and brown eyes. Brendan usually dons a business suit — white shirt, Black lapelled navy blue blazer with a matching blue tie that is pinned by the Acropolis Attorney's Office pin.

In his initial appearance in the game, Brendan wore a black and blue singlet with a white sticker in the front, displaying his code in the marathon.

Brendan Westcliffe initially appeared in the first case of the Midtown Acropolis district, as an assistant district attorney and a suspect in the murder of philanthropist Sharon Nolan.

The player encounters Brendan in the investigation as he was a participant in the Midtown Marathon, jogging along with the victim. Brendan claimed that he and Sharon were friends, meeting a couple of times due to her charitable deeds.

The team encounters Brendan again when they discovered a photograph of him and the victim kissing. Brendan stated that it was a one-time thing, as he had recently divorced from his ex-wife. Sharon was comforting for him. But she was against the idea of having their relationship official.

Brendan was found innocent when the Marathon commentator, Gina Kennedy, was found guilty of Sharon's murder. 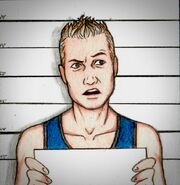 Retrieved from "https://criminal-case-official-fanfiction.fandom.com/wiki/Brendan_Westcliffe?oldid=104586"
Community content is available under CC-BY-SA unless otherwise noted.