Criminal Case Official Fan-Fiction Wiki
Register
Don't have an account?
Sign In
in: Kit0804's things, All Fanmade Cases, Cases made by Kit0804

Blooming into Darkness is the fourth case in Criminal Case: Hollyoaks Edition. It was made by Kit.

The case started after a message was found telling the team to meet someone at the florist at a specific time. When that time came, the team stumbled upon Barney Harper-McBride's body. He had been shot in the back. Along with his body was another note, taunting the team, another note was found. But it was faded. Annalise's autopsy revealed that the gun had been from a smaller gun. But would need it to work it out. She could work out that the killer was in contact with flowers. After the investigation, the killer was revealed to be Tilly Evans, an art student. Tilly killed Barney because despite her being a lesbian, Barney forced himself on her. Tilly then discovered she was pregnant. That's when she got an abortion, and when it went wrong and almost killed her, Tilly killed Barney by shooting him. Tilly was sentenced to 30 years in prison.

After the investigation, Myra and Bart McQueen turned up to the police station, in a furious argument. Myra had accused Bart of stealing Myra's daughter's ring which she put all her savings into. Diego turned up and suggested he help. Diego and the player found the ring, and returned it to Myra, after speaking to Bart, Bart revealed that he was going to pawn it, and apologised to Myra. Frankie turned up, saying that she was seeing someone, and her friend turned up, and revealed she was seeing them too, and cut her hair off in her sleep. She had lost her wig, needed it urgently. They found it. After the investigation, Ben walked in, upset. He said he had just found out that Frankie Osborne had recently just been murdered. 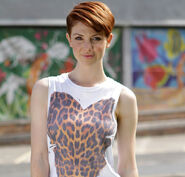 Co Owner of The Loft