Bill is the 41-year-old Head of Clandestine Operations for the Justice Corps. He has black hair and a mustache. He dons a brown coat with an ink stain and a Justice Corps badge over an olive green waistcoat and a white shirt with a red tie. Additionally, he wears a pair of glasses.

Bill became a suspect after his badge was found on a crime scene.He said that he had to pick up new weapons that arrived with the ship.When team told him that there has been a murder,he claimed that he heard about it and that George was his childhood friend.

Bill was interrogated again after team found restraining order from him to George.He said that George kept asking him for private Justice Corps information,but Bill refused to say it.Then George made newspaper article about Bill being behind the bank scandal,making Bill mad

Bill was eventually proved to be innocent after team arrested Norah Barnlow for a murder.

In the Interest of Justice

Bill became a suspect after team found his JC notebook on victim's farm.He said that he visited Vinnie and his friend Gibby after reports of them helping Archie in his plans.He also explained that he barely talked to Vinnie.

Bill was spoken to again after team found box of roaches and a threat he sent to Vinnie.Bill explained that it was only to scare Vinnie into confessing about his crimes,but it didn't helped. 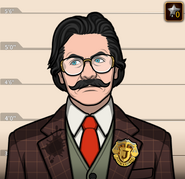 Bill, as he appeared in Branding on My Heart (Case #2 of Back to Past) 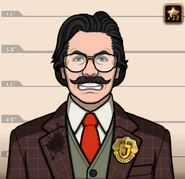 Bill, as he appeared in In the Interest of Justice (Case #8 of Back to Past).
Add a photo to this gallery
Retrieved from "https://criminal-case-official-fanfiction.fandom.com/wiki/Bill_Beatty_(BTP)?oldid=111195"
Community content is available under CC-BY-SA unless otherwise noted.