Bianca was a 25-year-old top model of GJ Fashion. She had long blonde hair along with blue eyes. At the time of her death, she was seen wearing a pink dress. She also wore eye glitter, a silver necklace and gold earrings.

The killer turned out to be model Sabrina Hopper.

Admitting to the murder, Sabrina sadly told the team that she was a drug addict during her high school years. After successfully stopping using drugs and becoming a top model of GJ Fashion, her drug-addicted ex-boyfriend came back and threatened her to give all of her money to him and sleep with him or her dark past would be revealed to other people. Being frustrated, Sabrina stabbed him to death when he tried to steal her money. Meanwhile, Bianca came to her apartment and accidentally witnessed everything, she then recorded a video of Sabrina killing her ex-boyfriend and threatened her to post the video viral if Sabrina did not let Bianca be GJ Fashion's top model. Angry at Bianca, Sabrina had put poison into Bianca's wine glass. Judge Park sentenced Sabrina to 25 years in prison for the murders of Bianca and her ex-boyfriend. 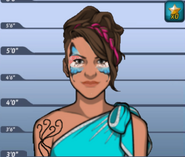