Barb Bellamy (1986-2020) was a main character in Season 3 of Criminal Case where she serves as Junior Detective in Fario Police Department until she was killed on duty by Ronald Crazy during his arrest.

Barb is now 33-year-old Junior detective with long black hair tied in a ponytail and light brown eyes. She donned a white t-shirt underneath a blue buttoned-down shirt tucked into black slacks and a belt. Additionally, her shirt was adorned with a radio, a gun, and a Fario PD badge. In her suspect appearance it's discovered that Barb knows how to fight and chew gums. 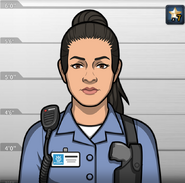 Barb, as she appeared in A Sad Start 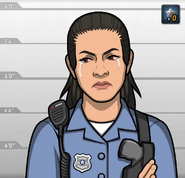 Barb, as she appeared in Hanged Like a Pig 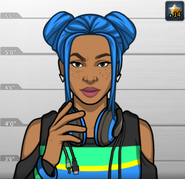